Dear friends,
We recently premiered Program 2 “Arms” at the Lucent Theater in Den Haag. The run of performances coincided with a memorial exhibition of Walter Nobbe’s work at the Pulchri Studios – where his work was often presented in the past. I made a short memorial film which we showed both here and in Amsterdam before the performances, and we dedicated this program series to Walter.. 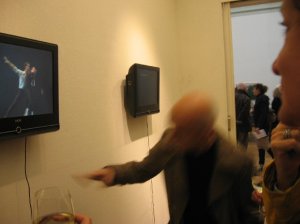 Jim's film at the opening